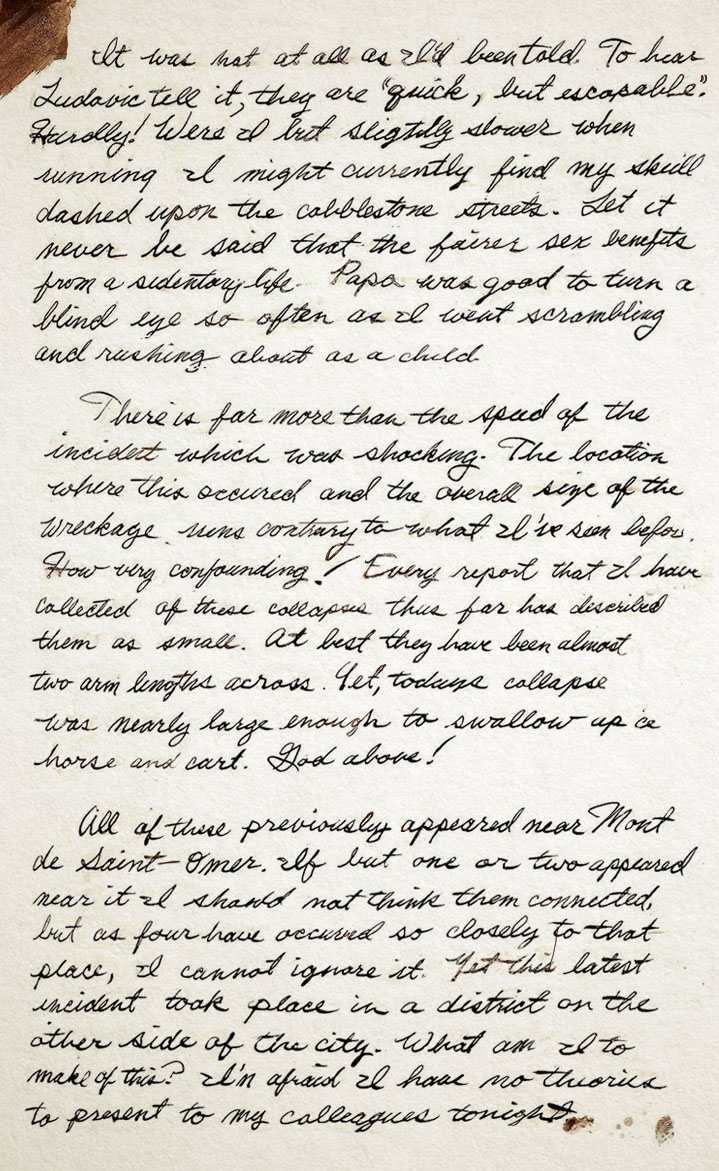 30th Dec 2013, 10:57 PM in 1
Rate this comic
Author Notes:
Rosengeist 30th Dec 2013, 10:57 PM
edit delete
This arrived in a book of notes that I found placed carefully near my door late tonight. On it was a letter that promised a painful death to anyone who might touch it other than myself! The higher ups sure are getting intense lately! Geesh!
I do believe that this may have been written by our heroine as soon as she returned home after that terrible scene with the horse. There's a lot of interesting things in here…but I'm not sure what it all means. Ludovic? Who the hell is that? And who are these colleagues…
I guess that neither you or I will know until the higher ups decide to make me privy to that info! The only way I'll find out is if I keep drawing this comic! (That's not entirely true, I do know who Ludovic and the colleagues are, but the higher ups are frightening and I don't want to let them know I've figured a few things out. Please don't tell them I know!!!)

By the way, if you have a hard time reading the fancy handwriting, I'm putting up a transcript here. Cursive! So elegant, but so cryptic!

It was not at all as I'd been told. To hear Ludovic tell it, they are “quick, but escapable”. Hardly! Were I but slightly slower when running I might currently find my skull dashed upon the cobblestone streets. Let it never be said that fairer sex benefits from a sedentary life. Papa was good to turn a blind eye so often as I went scrambling and rushing about as a child.

There is far more than the speed of the incident which was shocking. The location where this occurred and the overall size of the wreckage runs contrary to what I've seen before. How very confounding! Every report that I have collected of these collapses thus far has described them as small. At best they have been almost two arm lengths across. Yet todays collapse was nearly large enough to swallow up a horse and cart. God above!

All of the these previously appeared near Mont de Saint-Omer. If but one or two appeared near it I should not think them connected, but as four have occurred so closely to that place, I cannot ignore it. Yet this latest incident took place in a district on the other side of the city. What am I to make of this? I'm afraid I have no theories to present to my colleagues tonight.